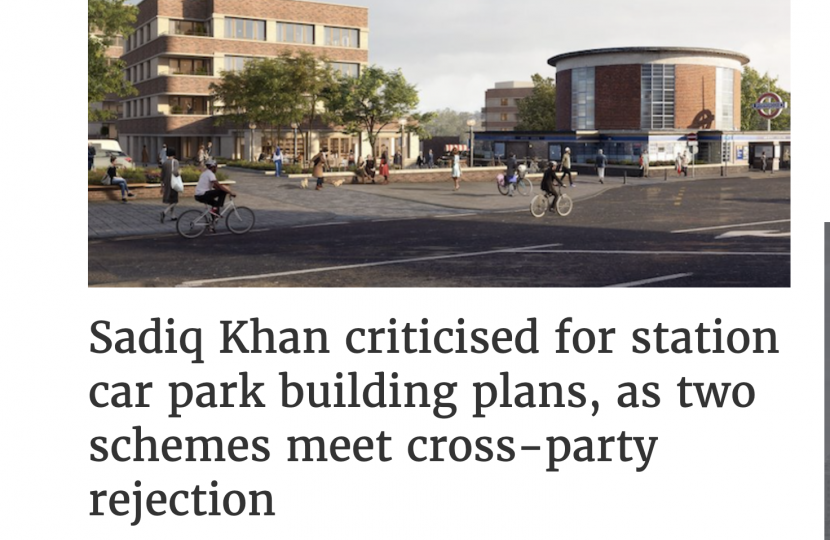 Transport for London's suburban home-building programme has had two recent setbacks, with both Labour and Tory politicians opposed

Sadiq Khan’s ambitious plans for new housing on Transport for London land have been attacked by Conservative members of the London Assembly as “warehousing” people in “high density tower blocks” when they should be providing family homes.

The criticisms came as plans for 118 affordable homes on the Canons Park London Underground station car park in Harrow were thrown out by Harrow councillors, despite their own planning officers recommending approval.

It was a further setback for the 10,000-home programme, following Enfield Council’s planning committee’s unanimous rejection earlier this month of a 162-home, 40% affordable “build to rent” scheme on the Arnos Grove station car park (pictured), also against council officers’ recommendations.

There was better news for TfL yesterday from Ealing, where councillors gave the go-ahead to a 50% affordable 852-home scheme on 3.6 hectares of mainly redundant industrial land at Bollo Lane, next to Acton Town station – TfL’s largest project to date, with 10 residential blocks including a 25-storey tower, plus commercial and retail space.

Boff said Arnos Grove scheme included just 14 family homes out of 162 and that the five most recent applications for TfL schemes proposed 135 family homes, representing just 12% of the total. “Shouldn’t you be using these schemes as an opportunity to support and create local communities, rather than just warehousing people?” he asked the Mayor.

Khan replied that government funding formulas were “skewed” towards subsidising one and two-bed homes rather than family housing. “We are very keen to have family homes that are affordable,” he said. “For that, we need to persuade the government to give us more funding. There is no point building family homes that people can’t afford.”

The Mayor pledged to continue building on TfL land, including “underused” Tube car parks, “encouraging more sustainable travel while helping to solve London’s housing crisis”. However, his programme, with more car park proposals to come, continues to face significant local opposition, often cross-party, in what has been seen as a battle to preserve the character of London suburbs.

Labour councillors joined Tory members in rejecting both the Canons Park and Arnos Grove schemes, which were also opposed by local MPs – Conservative Bob Blackman in Harrow and Labour’s Bambos Charalambous in Enfield, along with the Conservatives’ Theresa Villiers in neighbouring Barnet.

Last week, Villiers described the rejection of the Arnos Grove scheme as “a victory for north London residents who are determined to keep the character of their suburbs intact”. The former cabinet minister has also led Tory opposition to the government’s proposed hike in overall housebuilding targets in Outer London.

London Assembly Tory leader Susan Hall, who is also a Harrow councillor, has chimed in too, tweeting “Hurrah! Well done, we don’t want high density tower blocks!” in response to the Canons Park decision, while the Labour chair of Assembly, Brent & Harrow AM Navin Shah, objected on the grounds of “over-development due to the unacceptably high…density”. The Harrow scheme includes three blocks rising to seven storeys, while the Arnos Grove scheme includes four blocks altogether, one them at seven storeys.

Harrow’s former Labour leader Sachin Shah was something of a lone voice in supporting the Canons Park scheme. “Last night the Lab majority Planning Committee refused a 100 per cent affordable scheme,” he said. “We can’t solve the housing crisis without new homes or strong leadership. If you campaign for more homes but then refuse it, I’ve one question: If not here, then where?”

TfL developments due to come forward in north London include 370 homes at Cockfosters, up to 300 homes by High Barnet station and some 560 homes at Finchley Central. Applications for 128 homes on Rayners lane car park and 277 homes at Stanmore are also pending.

Khan said at MQT that around 1,500 new homes in all have been started since 2017, with planning permission granted for a further 5,500 and applications in he pipeline for 2,000 more. Overall, half of the new homes overall would be affordable, he said.