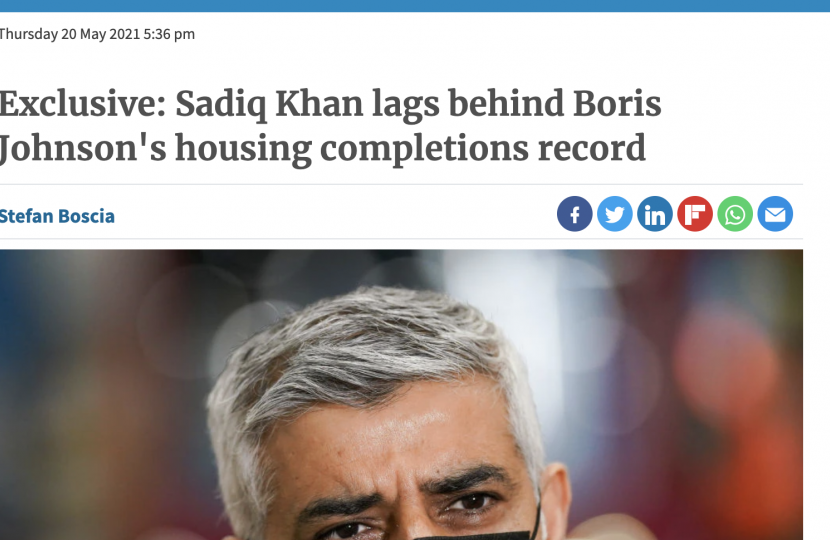 Numbers from the Greater London Authority (GLA) show Johnson completed 62,387 affordable homes in his first five years, while Khan has completed 34,659 in that same time period.

Khan’s office says the numbers are “misleading nonsense” and that the Labour mayor’s first year in office came after a “record low” number of housing completions by Johnson in 2015-16 hampered his early progress.

The Labour mayor was given a £4.82bn grant by the Theresa May government in 2018 to build affordable housing in London.

Andrew Boff, the Conservatives’ London Assembly spokesperson for housing, said it’s “no good sitting on nearly £5bn and patting yourself on the back for breaking ground on a new house”.

“Londoners can’t live in a housing start,” he said.

“The longer Sadiq Khan takes starting homes, the later they will be completed and ready for Londoners to move in.”

Responding to the figures, a mayoral spokesperson said: “The mayor has met every one of his affordable housing targets and started work on record-breaking numbers of genuinely affordable homes, including more new council homes than in any year since 1983.

“Affordable housing completions have increased every year under Sadiq from an historic low in the final year of the previous mayoralty.”

Christine Whitehead, professor of housing economics at the London School of Economics (LSE), said the large disparity between Johnson and Khan’s numbers may be because an increased focus on social rent housing in the past five years.

“This has been a much higher priority under Sadiq Khan,” she said.

The mayor has said he will set up a new City Hall-owned property developer to carry out the rest of his housebuilding programme during his second term in office.

He also went to the recent mayoral election with a rent control policy.

He said his victory meant there is now a mandate for the government to give him the powers to cap rents through a City Hall “private rental commission”.

In the London Assembly's first meeting following the election, the 25-member body elected a new Chairman and Deputy Chairman for the Assembly and its eleven committees.