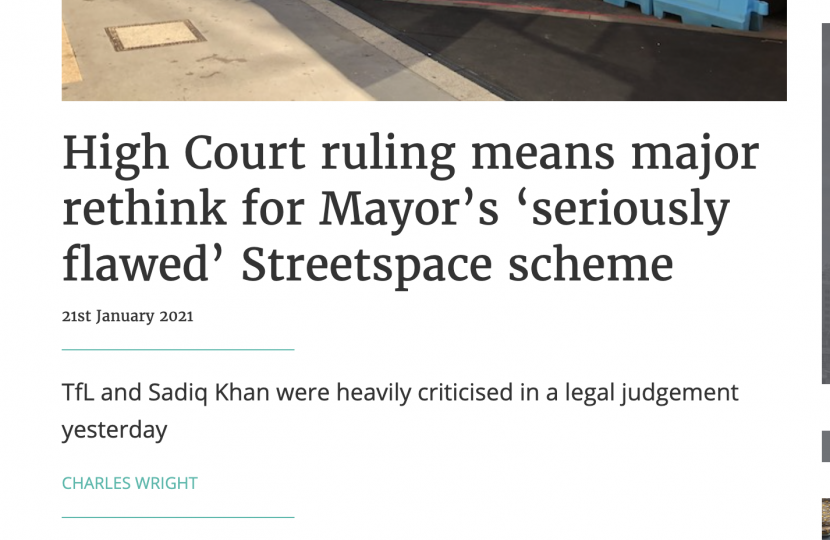 Sadiq Khan’s controversial plans to curb car traffic and promote cycling and walking have suffered a major setback – at the hands of London’s black cab trade.

In a detailed and strongly-worded judgment handed down yesterday, the High Court upheld a challenge by the capital’s Licensed Taxi Drivers Association (LTDA) and the cab drivers’ United Trade Action Group to both the banning of black cabs from Bishopsgate in the City and to the Mayor’s “Streetspace” plans overall.

The City Hall plans were “seriously flawed” and should not be allowed to stay in place, said Mrs Justice Lang in a ruling that could reverberate across London and even in Whitehall, where the government has also banged the drum for traffic curbs.

The Streetspace plans were launched in May last year, aiming to forestall a “car-led” recovery from the pandemic by implementing a range of measures across London, including segregated cycle lanes and “low traffic neighbourhoods”.

A key element of the plan was to “transform parts of Central London into one of the largest car-free zones in any capital city in the world”, including by banning all vehicles except buses from Bishopsgate between 7 a.m. and 7 p.m. on weekdays, a decision widely condemned by taxi-drivers picking up passengers from Liverpool Street station in particular.

But the measures proposed “were extreme, and went beyond what was reasonably required to meet the temporary challenges created by the pandemic,” the hard-hitting judgment concluded: “It was possible to widen pavements to allow for social distancing and to allocate more road space to cater for an increase in the number of cyclists, without seeking to ‘transform’ parts of Central London into predominantly car-free zones.”

Instead, the plans sought to “take advantage of the pandemic” by pushing through “radical changes” without consultation and based on “conjecture” rather than actual evidence either of major increases in cycling and walking or of excessive traffic with risks to safety and public health.

And there was no evidence, the judge said, “to suggest that there will be a permanent pandemic requiring continuation of the extreme measures introduced by the government in 2020.”

The Mayor’s plans also failed to recognise the “distinct status” of black cabs as a form of public transport and their right to drive in bus lanes, and, crucially, failed to make proper equalities impact assessments, particularly for disabled taxi-users.

“It is no exaggeration to say that, without taxi services, many disabled people simply could not make trips which are important to them,” the judge concluded.

But assessments had not been undertaken when policies were formulated, and such analysis as had been carried out “did not meet the required standard of a ‘rigorous’ and ‘conscientious’ assessment, conducted with an open mind”, reading instead as if its purpose “was to justify the decision already taken”.

With Khan forced back to the drawing board, the city’s cabbies are the immediate victors, though current measures will remain in force pending an appeal.

The judgment may have wider implications, not just for City Hall (with an election coming up) but for boroughs implementing often contentious traffic schemes at Khan’s behest, and perhaps even the government – the judge noted that the London approach was “consistent” with guidance from the secretary of state for transport.

Many of these schemes, still in their “experimental” phases, must now be under further scrutiny, along with schemes in the pipeline. Mrs Justice Lang’s key finding that the plan was “not a rational response to the issues which arose as a result of the Covid-19 pandemic” implies the need for a new focus on evidence to support their introduction, including equality impact assessments, access for taxis and proportionality.

LTDA secretary Steve McNamara welcomed the judgment’s recognition of the “key role licensed taxis play in our great City.” The court had “upheld the importance of taxi access and the points we’ve raised repeatedly with TfL and City Hall since they first announced Streetspace but which had sadly fallen on deaf ears until now,” he added.

“We were told the pandemic gave policy-makers free rein to act, without consultation, leaving us no choice but to go to court. The judge has made it clear that this should not have been the case.”

The decision confirmed that “Sadiq Khan has treated disabled people with contempt, shutting them out when decisions on new road layouts are considered,” Conservative London Assembly member Andrew Boff told On London.

“Despite the uproar over the impact of these schemes he has publicly stated that he has no plans to improve the way in which the GLA consults disabled people. There can be no starker choice for Londoners: to support a one-size-fits-all transport strategy or one that includes those with the greatest challenges in getting around the capital.”

However, Simon Munk from the London Cycling Campaign described the challenge as “the latest in a long history of the taxi industry opposing any scheme that seeks to cut car use and boost walking and cycling”

Disabled and elderly taxi-users represented a “minority of trips by taxi”, he added. “We need to prioritise buses, cycling and walking, particularly during the pandemic. That means working out ways to restrict and reduce unnecessary motor traffic journeys, including in taxis, while ensuring access for those who need it.”

A spokesperson for the Mayor confirmed that the judgment would be appealed against, adding: “We mustn’t get through one public health crisis only to face another caused by congestion and toxic air pollution.”