The House: Blue-green-red: are the Conservatives stealing the environmental agenda? 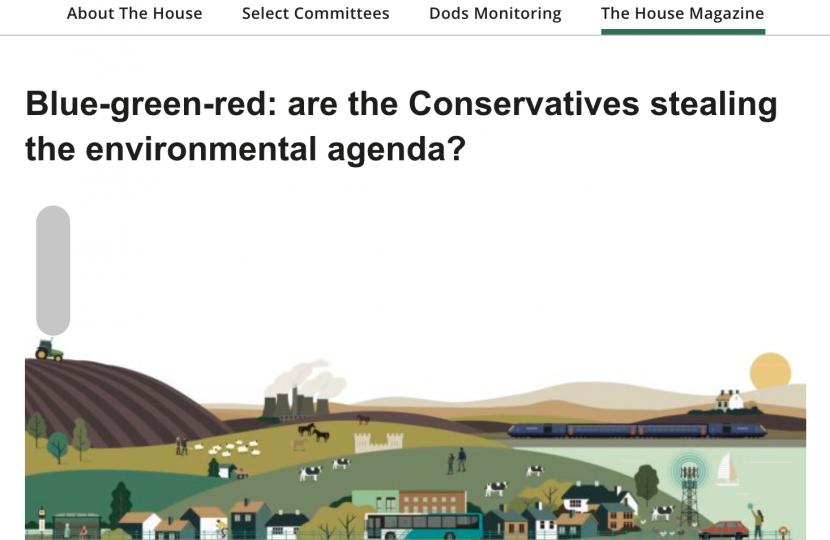 Read the full article on The House Magazine here.

Tory Vegans, radical carbon reduction targets, the hosting of COP26… the Conservatives are having a ball when it comes to the green agenda. Is it flimsy politicking, or genuine sentiment? And where does this leave Labour and the Greens, who occupied this space for so long?

Was it the moment the Vegan Conservatives group sprang into action that pushed the Tories into the hipster green scene? Or was it the time the Prime Minister’s fiancé Carrie Symonds jumped on a platform, mic in hand, to give a speech decrying Japanese whaling?

There’s no doubt the Conservatives have been consciously seizing the green agenda in recent years. Just this month, the government committed the UK to cutting carbon emissions by 78 per cent by 2035. Yet veganism - diet of choice of the hardcore animal welfare activist, the young and the Instagram fitness crowd - is not a space one would naturally expect the Tories to have ended up in. When it comes to the countryside, this is supposed to be the party that represents farmers, and the huntin', shootin' 'n' fishin' set.

Wildlife campaigner and writer, Dominic Dyer, who has worked with the Prime Minister’s fiancé Carrie Symonds and Defra minister Lord Zac Goldsmith on a number of major environmental projects since 2017, said Vegan Conservatives would have been unthinkable in the past and describes it as just one “sign of the times.” It was founded by London Assembly member Andrew Boff, and some of its supporters are red-wall Tories, and from the 2019 intake – those with a more urban and younger set of constituents.

Dyer dismisses the oft-heard criticism that the Tories’ march greenwards is merely opportunistic.
“This is far from window dressing. The Government is now expected to implement a number of important policies in the next Parliament, ranging from a ban on live animal exports to restrictions on the shooting of hares, ending the sale of fur products and bans on wild animal trophies and foie gras being imported to Britain,” he said.

“These are policies many of us have been campaigning for under both Labour and Conservative governments for decades.

“From my experience, none of this would be happening without Zac Goldsmith as a minister and the influence of Carrie Symonds on the Prime Minister.”

And on how this impacts other parties, he says: “By delivering on these policies the Tories could well eat into the Labour and Green vote at the next election, particularly with younger voters.”

He noted that the party is still trying to build itself back after Theresa May suggested at the 2017 general election that she was open to reviewing the fox hunting ban.

Stewardship of the natural world is a core part of conservatism

This ongoing debate that the Tory commitment to environmentalism is for electoral gain rather than long-standing conviction will no doubt continue to haunt the party unless there is obvious change. But are they actually stealing, or encroaching on, other political parties’ turf?

Environmental campaigner Ben Goldsmith – brother of Zac - insists stewardship of the natural world is a core part of conservatism, dating back to the philosopher Edmund Burke, founder of modern conservatism. The influential Conservative Environmental Network (CEN), which Ben chairs, insists the Tories WILL take back the green agenda from Labour, on the grounds that this is their natural territory.

“We’re so often told that only the political left is able and willing to tackle the many and growing environmental crises facing us,” he wrote in the manifesto’s punchy forward.

“Why has this become the received wisdom? And why have conservatives allowed this myth to be perpetuated? Time and again, from Mao’s China, to the Soviet Union, to modern day Venezuela, we have witnessed environmental ruination at the hands of the political left.”

The CEN is a campaign group, not the government, but its thinking is important. Goldsmith says the Tories always work with the “grain of nature,” and environmental protection can only be funded by a healthy, presumably market-based, economy.

Symonds is obviously an influence. She currently works for the Aspinall Foundation and is patron of the Conservative Animal Welfare Association. Apparently, it was Symonds who made the case to Johnson that vaccinating cattle against bovine TB would be better than shooting badgers. And hey-presto, there are now no new badger culling licenses due to be handed out after 2022.

The jewel in the crown for greens in government will be hosting the COP26 UN Climate Change Conference in November in Scotland.

The Green Party sounds furious the Tories are spinning, to some degree of success, that they are serious about climate change.

“What’s missing is action,” says Baroness Natalie Bennett, former leader of the Greens. “There’s supposed to be a heat and building strategy and a decarbonisation plan, a zero-carbon strategy. They are all supposed to be planned before COP 26.

“On hydrogen there’s a big debate to be had, we haven’t had that national debate yet.
“The one area where they attempted some action – the Green Homes Fund – was a disaster from start to finish.”

The Green Homes Grant (GHG) to insulate UK homes was scrapped in March after reaching just 10 per cent of the 600,000 houses the chancellor promised would be improved by the investment. Overseen by American firm ICF, in March the Commons’ environmental audit committee said it had been poorly implemented.

Baroness Bennett said there was a positive story to tell from the past decade if you look at energy, for example the UK is well free of its reliance on coal-fuelled electricity stations.

“But we have done virtually nothing when it comes to transport, homes and agriculture,” she said.
Ideologically though, she said she is “delighted to have won the argument”.

As for Labour, for some members, the party seems to be drifting on the environment. Under Jeremy Corbyn, activists fostered a strong green identity, and grassroots members were successful in getting the party to back net-zero emissions by 2030 at a party conference held in 2019. At that point in time, the Tories had legislated to meet that date by 2050.

Chris Saltmarsh, co-founder of GND, said: “Their strategy is ‘we will take small steps to where we want to be in 2024,’ but the climate crisis is urgent, and it should be much more at the forefront of what Labour is saying. It’s politically frustrating, because there’s so much overlap with the response to the pandemic and the response to the climate on green jobs and the economy.”

The Tories are moving in on the green agenda, but it’s borne out of a sense of crisis, he said.
A very direct attempt at swiping Labour’s crown was Johnson’s Ten Point Plan focusing on hydrogen, nuclear power and electric cars, released in November 2020, which he branded a “green industrial revolution” – the exact phrase Labour had been using 18 months earlier.

Saltmarsh said: “It wouldn’t surprise me if that wasn’t part of the government’s calculus, to really try and neutralise some of the areas Labour have been strongest on.”

For Labour to get back on the front-foot, he thinks they need to hammer home the 2030 date for zero-carbon emission.

He said: “That really resonated with so many activists. What it stood for was our ambition. That put us apart from other parties.”

The Tories do look primed to steal a march on the environment, even though it’s early days and the pandemic’s impact on political life is still uncertain. The turf war, particularly the attempt to steal Labour policies, is fascinating, yet it all comes down to concrete action and visible change. And all three parties agree: time is running out.