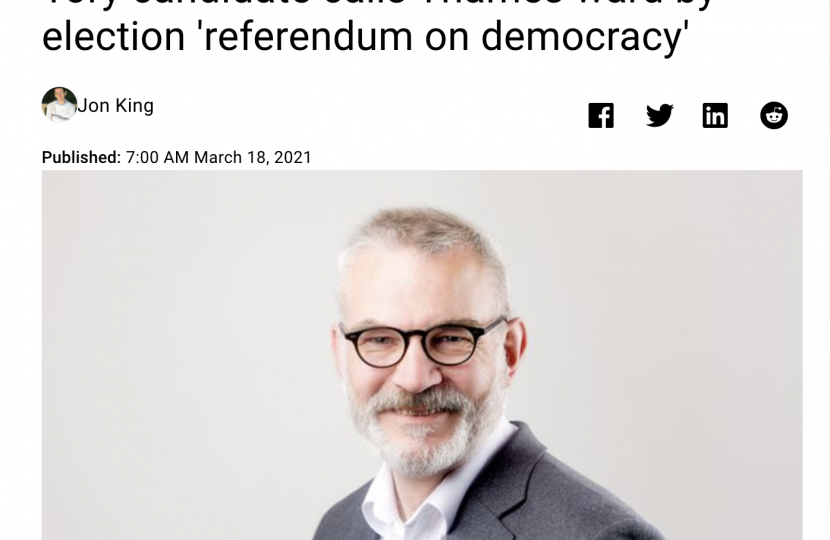 Read the full article on the Barking & Dagenham Post here

Andrew Boff is the Conservative Party's candidate for the Thames ward by-election on May 6. - Credit: Tom Simpson/Greater London Authority

A by-election will be a "referendum on democracy" according to the Conservative Party's candidate.

A vote in Thames ward, to be held no earlier than May 6, is set to be triggered following the resignation of Cllr Bill Turner.

Andrew Boff, who represents the capital at City Hall, has entered the race for the Tories.

Mr Boff, who lives in the ward, said: "This by-election will be a referendum on democracy."

A Barking and Dagenham Labour spokesperson said: "We acknowledge GLA member Andrew Boff has put himself forward as a candidate in an election that hasn't been called.

"Our focus has been on working in the community rather than doing politics when it comes to local elections."

Mr Boff said the council introduced a controlled parking zone (CPZ) in Thames ward despite 80 per cent of residents rejecting the proposal and only 14pc in favour.

However, a council spokesperson said only 10pc of residents responded to its consultation after 2,400 letters were sent.

Air quality, road safety, accident figures as well as access for emergency vehicles and bin lorries also helped in the decision to introduce charges, he added.

But Mr Boff said: "It’s time to take back control of our streets and scrap the CPZ. Barking and Dagenham is a one-party state with no opposition, that’s why they get away with this undemocratic behaviour.

"The CPZ's undemocratic imposition highlights that the residents’ opinion doesn’t matter to the council.

“Whilst residents are being forced to pay to park outside their homes, Labour councillors have given themselves free parking permits worth £748. This is the real cost of Labour’s monopoly over our borough."

However, the council spokesperson described the figure as "misleading".

Councillor permits are for visits to constituents, attending meetings, holding advice surgeries and, in the last year, delivering aid as part of the pandemic response.

"No charge has ever been raised for permits for carrying out such duties and this is no different from the practice across all London boroughs," he added.

The Post understands the Green Party and Liberal Democrats have yet to select candidates.